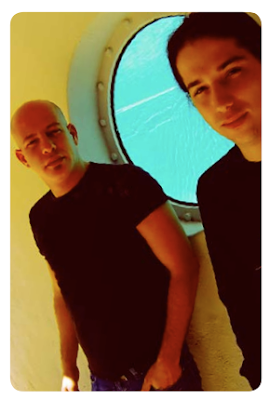 BY ALFONSO CORONA AND ISA TRAVERSO-BURGER

Their lyrics don’t paint them as a cheesy pair of Djs: “I wish to give, to take, to make, to check, I wanna see it happen. I want to see, to be, the one that plays the game without no fears and re- grets...” In fact, they are rich in experience and poetics, which is not awfully usual in this genre of music. This Israeli duo formed by Erez Aizen and Amit Duvdevani (Duvdev) has been in the electronica scene since the late 90’s. In 2004, In- fected Mushroom left their base-camp in Haifa, Israel to settle in the Mecca of entertainment, Los Angeles. But, it doesn’t matter where they put down roots, their home is the world because they have toured non-stop since 1999. Their new album, Vicious Delicious promises to be con-sistent with the sonic evolution characteristic of these two -music producers, pianists, creators of psytrance- in their previous albums: The Gather- ing, BP Empire, Converting Vegetarians and IM the Supervisor. Infected Mushroom is one of the top International melodic trance producers in the world, and it all began with a rave party during their trash metal years and a stay in Goa, India. During the Ultra Festival in Miami, they met with Distrikt and proved to be talented guys with a dream that is still coming true each day.
How long have you been in L.A?
One year and a half. Before that we were at home in Haifa, Israel.
How is the creative process to create your tracks?
Most of the times with a beat, something basic, then we add melody, maybe piano because we both play it and then we build on that. I can’t really explain it; something happens when we are making music. 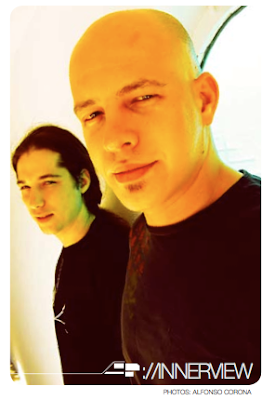 When did you become involved with electronic music?
Well, we both play classical piano since we were about 5. But then, it became boring and when I was a kid 13, 14 years old, in 1993 I heard electronic music for the first time. I liked it, I don’t know why, maybe because also my friends liked it and we connected that way. I made music before, but cheesy rock music and stuff like that. I tried making electronic stuff and Infected Mushroom was born. 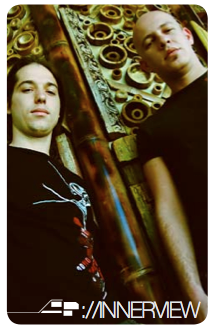 Why Infected Mushroom?
When we started there was a band called Infected when I was 16. We never thought or had idea that we would be able to travel the world making music, you hope, but it’s another thing when it becomes reality. So we split, went to the army, to England, you know, growing up. The band, Infected, parted ways and when we became serious with the music business we called ourselves Infected Mushroom.
How do you visualize music?
I see people dance.
What’s your favorite part of the music-making process?
I like writing the melody, to think about new melodies. To invent a sound is almost impossible, you are sure somebody made it before and that’s a challenge I really like.
When you see people dancing, do you see colors, smells or textures?
I like complex stuff, I don’t like simple music, I don’t see colors or anything like that, sorry.
Where do see yourself in 10 years?
Doing music with hopefully less shows, it’s too much right now. I think we will continue to do what we do but would like to also produce for other people. Right now we are very happy performing everywhere because you never know how long it will last.
How do you see electronic music now?
The way we see it is that audience who like the scene has grown from 1,000 who went to a show, to 30,000 going to party, it’s a commotion in a good way and I hope it continues to grow.
What music do you listen to?
Challenging music you probably haven’t heard of like Violet Vision. I like break beat bands that are complex, radio, Dream Theater and even Christina Aguilera. I listen to a lot of productions because of the sound I’m looking for.
Do you like to remix?
I don’t mind it but we write something different, not commercial. I appreciate commercial stuff but we do what we believe in, what works for us, and we like to keep it that way.
If your music had a taste what would it be?
Steak (laughs).
What are you doing tomorrow?
Flying to L.A to see the wife and girlfriend of each of us, then we leave for Turkey and England and you have to check the website for the places because I can’t remember, we are touring nonstop.
What do you think is the main difference between electronic music and the rest? We are not simply kick n’ bass music; we try to change every minute to a more complex and more musical style. Hopefully this will move people, it’s uplifting stuff that we build not to make it standard.
What’s you favorite instrument for making music?
These days, a new synthesizer that is very interesting. It’s a new way of making sounds that people never heard before.
Posted by Alfonso Corona at 2/07/2010