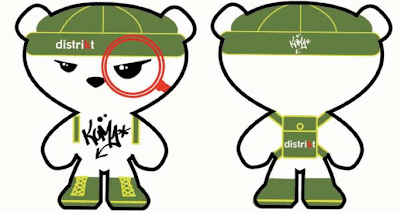 Back in the 80’s where girls dressed like boys with loose clothes, oversized blazers, short haircuts while the boys liked the eye paint, glossy lipstick and girlish dances, bands like Duran Duran, Depeche Mode, The Cure, INXS and every trans-hair-feminine music group was the ultimate success...
....Back when there was a whole audience for two boys named “Cory” and the coolest thing was to go to the movies to watch the “Brat Pack” wearing a jean jacket, comes the birth of the action figure and the way people see a whole new generation of conceptual characters that detonated one of the first stages in graphic design history.
This 80’s fever blew up basically when a movie director created plastic versions of his sci-fi movie characters, this was called the Star Wars fever, a never-before seen marketing extravaganza that sort of ended 25 years later....This is where the figurines and other interesting adult-toys and articles (not the ones Alberto would talk about in his S.E.X section) became a fundamental part of our childhood and culture evolving in some other ways; later, they divorced in physical and conceptual ways from their ‘ideal parents’ or roll models -Barbie and Ken- starting a new generation of human thoughts.

Can you imagine our generation growing up without figurines? These guys have been more transcendental than we think...
Anyway, several years later, this graphic movement started to flourish when a guy called Bill Gates was forced to re -invest some money in a company that Forrest Gump called ‘some fruit company’ (Apple) in order to avoid a monopoly trial about him controlling the computer world (like he doesn’t, right?).
Once Apple was revived in the early 90’s after being overwhelmed by one of their own creators, the whole graphic design industry became one of the most effective and fast-growing movements in the whole human communication history.... all this thanks to Congress!

These days with the marvelous Macintosh computers being more efficient in every bi-monthly expensive release, graphic arts and proposals have been evolving and becoming accessible to most people, even the non-technological ones.
Today we have different, almost infinite, design and production styles; the graphic design world has amazing dreams and proposals that have become real works of art and creativity, just like our favorite pet: Kuma Distrikt (no offense Ansel and Jelly).
For some people, these figurines are only toys, for some of us they are real forms of modern art. I’m pretty sure of one thing, every time I take a look at some of Maria Sarmiento’s designs they make me feel like the way I felt back then, when some of our most important activities had to do with doing homework and eating our vegetables. I feel that but with the intensity that comes with adulthood.
Although the graphic designer, industrial designer and architect have a very tough place in the communications industry by having to combine an artistic inspiration with a client’s taste, all of them manage to do a bit of everything by becoming inspired, developing the digital file, doing the changes or adjustments and, the most painful one after some long weeks or months, getting paid!
Have you tried to fabricate any art in your office or home lately? Have you tried it even if you think there’s not a single hair of art-talent in your body?
Well, we suggest trying this out! Even if you’re an accountant and have paper clips all over your desk or you’re sitting in this wonderful plane via Mexico or in your home office...go for it an do it only for your own pleasure, once you’re pleased, you can share it with other people.
Look all around for the first thing that catches your eyesight, grab it and like Don Armando Manzanero said in our 3rd issue’s INNERVIEW: Do something pretty with it!
Don’t be afraid of re-shaping it or giving this object a different view, a different life or function, you can re paint it, re use it, give him other object friends that want to share the same space with him, etc. Do something unique with it and feel free to do it! If this object was not yours and you accomplished something that pleases you, ask the person who owns it to donate it for the sake of art.... trust me, great art creations came from moments like this.
I think that ‘creativity’ is another muscle in our body and like the rest of unused muscles, they loose strength and ability, so use yours every day....
One last tip, if you’re a guy, don’t just use this growing creativity to have day sex with every girl that goes by and if you’re a girl don’t just use this creativity to feedback conclusive ideas. This wonderful energy and ability inside every human being is meant to make pretty things and make all of us understand each other in two universal languages: Love and Art.
Posted by Alfonso Corona at 7/12/2010