Cuban born Jorge Luis Varona left his home island at the age of five.
Although he enjoyed doodling, he didn’t want to take art classes,
“because I didn’t want someone to tell me how to do it” -even at the
urge of his parents. Feeling puny about his role in the world he went
for a Business Major in Miami Dade Community College and received
an AA. After that, not able to alienate the inspiration pouring out of
his mind, he enrolled in UM where he transferred from ‘architecture’
to ‘fine arts’. It is at this age of 22 that Jorge Varona finally began to
focus on his calling.

Besides obtaining an M.F.A from Colorado State University, he has
earned, twice, the Oscar B. Cintas Fellowship, -allowing him to be
exhibited in galleries all over the USA with other renowned Latin masters
such as Frida Kahlo, Fernando Botero, Wilfredo Lam, Amelia Pelaez, Tomas Sanchez and Miguel Padura.
His detailed-oriented works, which can take from one to six months
to complete, identify him as a realist; or how the audience’s acceptance
has categorized him: New American Realist. What his art
expresses is the perfect picture. He draws-as well as paint- with
such an impeccable detail, that you don’t know if what lies before
you is a painting or a photo, but it’s certainly a work of art. His
nudes are subtle and tasteful, -his portraits angelic.


Recently he has been centering the attention of his art on his Cuban American heritage: cafetera cubana, guayabera, machete,
juxtaposing it with something American, like apple pie. The aroma
of the coffee in the house, family and friends sharing the experience
of “un cafecito” all bring fond memories. Whether it is classical
or modern, his pieces tell a story, they take you to a moment
you might have lived, or might want to. He remembers nostalgically
and transmits this feeling to us, while it gets harder and harder
to believe the talent he creates. His images also include a leather
bomber jacket, “anones” that may identify his warrior side.
In Varona’s own words, “My work celebrates my heritage. I want to
take these objects that have been a part of me and elevate them to
something more than a mere object. In my work you will also find
hidden objects, they are almost a language of my own. These hidden
images might be a skull, the island of Cuba, and others. They
invite you to look at my work and revisit it to find more. The scale
of the paintings range from 12x18 in. to 3x5 ft.”
According to Carol Damian, art critic, Varona’s work has received a wide acceptance
within the category of New American Realism. “It is especially unusual today to see
the work of an artist who displays a mastery of the oldest and most traditional form
of artistry. The viewer is at once seduced and mesmerized by the accuracy of their
representation.” Armando Alvarez Bravo, art critic, states, “Varona is a Cuban artist
with a clean execution that introduces in his pieces a narrative that is eminently
figurative.” 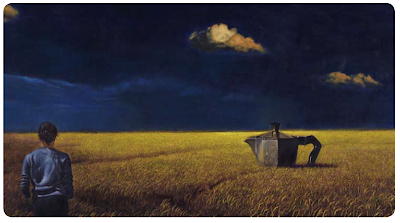 Jorge is also a dedicated family man; his wife Iliana is a ballerina turned schoolteacher;
his son Jorge, an aspiring bass guitarist; and Carolina, his angel-like daughter
is a special needs child.
Posted by Alfonso Corona at 7/26/2010